Blade of Queen will undergo an update for S1-S141to improve and provide better game experience, which starts at 03:00 July.11 (PST). The update lasts about 15 minutes after the in-game announcement.

COMBO Level: The main character or buddy has a chance to make a COMBO of the same attack after hitting the enemy with a Melee/Spell/Special Attack. The higher the COMBO Level, the higher the probability of triggering the COMBO.

1) A Combo will only repeat the last attack, and it will not trigger again if it succeeds.

2) Attack triggered by COMBO will not change the Rage of the attacker.

3) If skills or Halidom have a combo effect or additional attack, the skill combo will be triggered first, then the attribute COMBO triggered.

Eg: If the Buddy's EX skill is a double-attack, then the second attack of the EX skill has a chance to trigger the COMBO, totally three attacks.

*Another【Devourer】will be summoned when Sunder’ Special Attack triggers the COMBO.

Entrance: Click on the right tag of Peak Level interface to enter.

Introduction: Players can challenge the Peak Tower to obtain materials for making and upgrading the Peak Flag. Peak Tower need to be challenged stage by stage. You can only choose main character or one buddy to challenge. Successful challenge will consume your Stamina.

Additional rewards can be obtained after first successful challenge of certain Stages.

Automatic challenge will be unlocked after first successful challenge of specified Stages.

Progress of Peak Tower will be reset at 0:00 a.m. every day. Players can also consume Gold to manually reset the challenge progress. 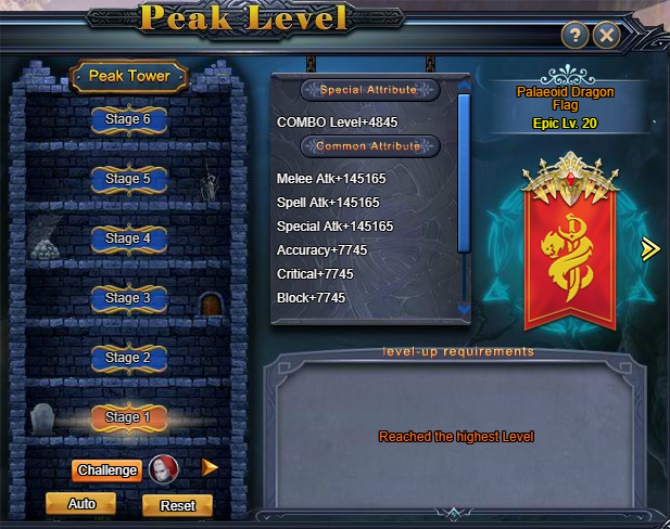 * The Peak Flags of main character and buddies are independent of each other.

3. Special rewards of Honor Hall for completing all missions on each page­-Kochab Sword Sacred Gear

For completing each stage of missions in the Honor Hall, a corresponding number of Kochab Sword Sacred Gear can be obtained, which can be upgraded to 10 stars when all the missions of the Honor Hall are completed. 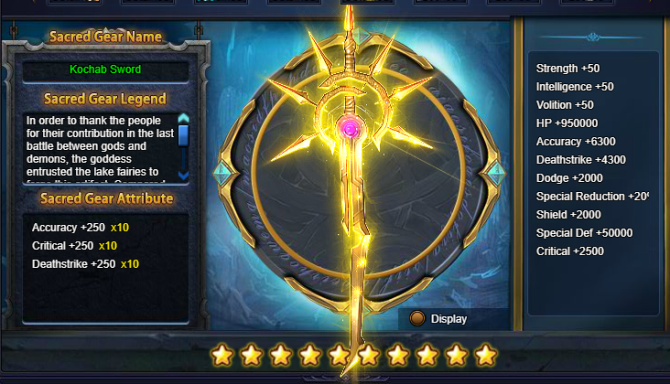 Special skills can be activated when Kochab Sword upgrades to 8 stars:

Turn one or multiple random targets of the opponent into skeletons, who cannot attack and will lose 12% of the maximum HP for the current round (ignoring Divine Shield, while affected by other damage reduction Buff), and the damage taken increases by 100%. The effect lasts until the targets do the second attack.

During the activity, the system randomly gives three questions. Players from all servers participate in answering questions together.

5. New mission of Date with Goddess is added in Daily Missions

1. Optimize the upper limit of the amounts of Artifact Stars that can be used in Star-Upgrade after reaching Divine 6 Star.

2. Optimize the operation and display of Date with Goddess.

Fixed Bug that bullet screen game is bound to be triggered every time dating with Goddess.