Battle Soul can assist players in the field as a special unit. Battle Souls can be divided into Elemental, Mechanical and Holy Light Battle Souls. Three different types of Battle Souls restrain each other. *If you reobtain a Battle Soul that you have already possessed, it will be decomposed into Battle Soul Star Upgrade Stone.

Players can spend 200 Gold to Polish Battle Soul, which can reset all Aptitudes and Passive skills of the Battle Soul.

* Specified Aptitude can also be increased by using Battle Soul Aptitude Stone, which can be obtained in Training Field or official events.

Players can consume Battle Soul Star Upgrade Stone to upgrade Star Level, up to 10. The higher the Star Level of Battle Soul, the more attribute bonus it has. When the Battle Soul reaches 10 Stars, Rage Saving can reach 100.

1. There are 7 common Sections. The higher the damage players deal to the monster, the higher the star players achieve when completing the section. Rewards are available for reaching each star.

The total number of Stars players achieve will be counted in the all Server Section Rankings.

* It’s required to complete previous Section with at least 1 star before challenging the next one.

2. BOSS Section is a special section that no challenge restrictions, and no star rewards as well.

The damage to BOSS dealt by players will be counted in the all Server Boss Damage Rankings.

3. Section Rankings and Boss Damage Rankings are settled every Monday at 10:00 (server time). Top 10 players in all server can get ranking rewards. 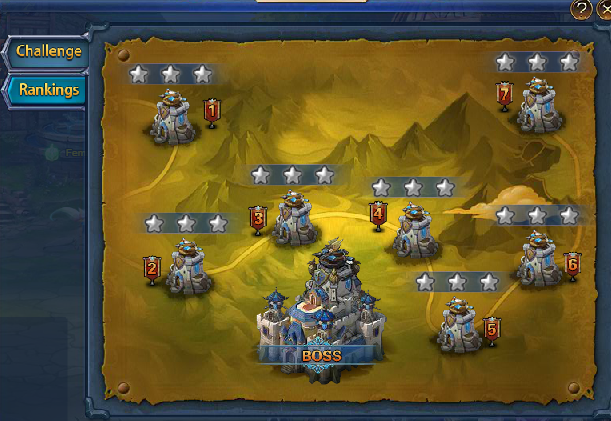 2. There is at most one Battle Soul in the battlefield. The rest are substitutes that will enter the field after the previous one dies.

Battle Soul is a special unit that will attack before main character and buddies in each round. The order of Battle Souls’ attack will be determined by the team's Initiative value. The specific battle mechanism is as follows:

1. When Battle Souls are present on both sides, they attack each other. After Battle Souls attack, the two sides compare the number of Battle Souls alive (if it's the same then compare their current HP), and Battle Soul of the winner will attack the buddies of opponent once more at the end of the round. (If they are tied, both sides will not attack).

2. If the opponent has no Battle Soul, the Battle Soul will directly attack the enemy's buddies.

2) If neither side has Battle Souls alive, Thunder will no longer be triggered.

3) Thunder can deal 1 Billion damage at most.

The restraint relationship is as follows:

Each Battle Soul has its own unique EX Skill which is released when Rage reaches 100 in battle. The way of acquiring Rage of Battle Soul is the same as that of buddies.