Introduction of 【Miracle Mine】

Requirement: Unlock when Main Quest of Lv.120 is completed.

· During the activity, all players can exploit in the Miracle Mine.

· Mine divided into common and advanced Mining Area. The quality of the mining area ranks from low to high: Bronze, Ingot, Amethyst. The higher quality mining area is, the bigger rewards player will obtain. 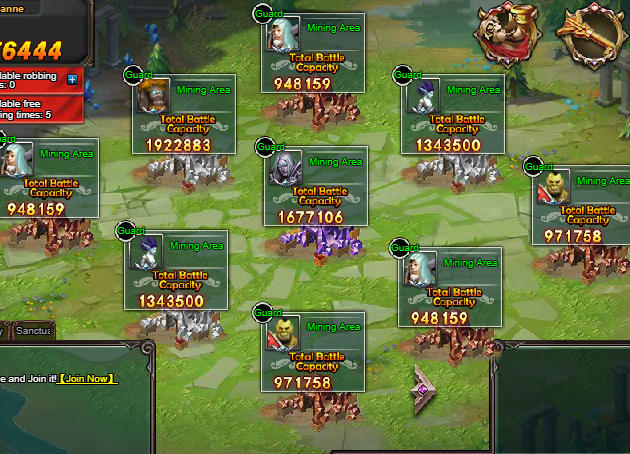 · In the primary stage, every mine guarded by monster can be occupied by player after killing the guard monster. Everyday players have 5 free robbing times to attack monster and rob other mine occupied by other players. Player also can spend Gold to buy extra robbing times.

* Free robbing times will be reset everyday without cumulation. Players also can spend Gold to buy extra robbing times that will remain without being resetting.

* Player only can occupy mining area for 4 hours in the primary stage. Player can spend Gold and stamina to prolong the occupation time on the right side of checking rewards Interface.

·Players can check his currently occupied mining area and remained occupation time on the right side of activity.

·After player occupy the mining area. As time goes by, occupation will gain you many resource with accumulation. Rewards divided into【Common Minerals】,【Extra Rewards】and 【Random Rewards】.On the Check Rewards Interface, players can preview the rewards that they can obtain.

·Players can quit his previous occupied mining area at any time. Then obtain rewards in【Current Profit】

·When occupation time meets the maximum, player will auto-quit the mining area. The relative rewards will be auto-sent to Bag.

* If your occupied mining area is successfully robbed by other players, you will only obtain part of common rewards. 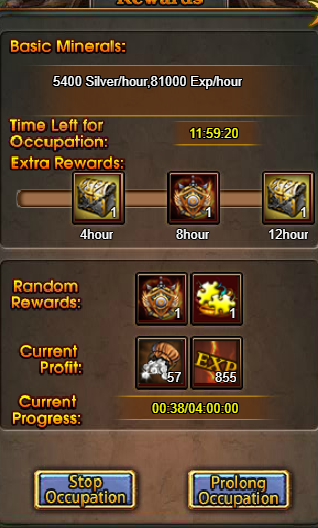 The Tier rewards are divided into 3 tier. Player can obtain relative reward after occupying the mining area for a relative time. Mysterious Pack from extra rewards can be open normally or by keys.

* Keys can be obtained from official events after a certain recharge tier.

·After the activity is over, all players cannot stay in the mineral vein any more and cannot obtain any rewards. So please quit Occupation in time！

Hover the mouse here to check the requirements to obtain Keys

·If successfully being robbed, the previous owner cannot take it back within 15 minutes. If someone robs other mining area unsuccessfully, he will undergo a cooldown time for 10 minutes, at this time, he cannot rob others.

* It will have a certain protection period after player successfully occupy mining area when other cannot rob this mining area.

* If two sides battle for 30 rounds without results coming out, then the side who guards will be the winner.

* Player who rob you successfully will not inherit the previous occupation time. So time accumulated for the extra rewards re-starts to count from 0.

·Down the message box on the right side, player can check who robs his mining area and can come to revenge.

· During the Miracle Mine, players can spend Gold to inspire Battle Capacity and add attributes bonus on the team. The BC Inspiration will effect when player guards his mining area and robs other mining area.

·BC Inspiration will reset at 0:00 every day.

* This BC Inspiration only effects in the battles that happen in the Miracle Mine.

Players have limited times for BC Inspiration, which is related to VIP Level.